Eggemoen Aviation & Technology Park is being developed by Eggemoen Utvikling, and is consistent with Ola Tronrud’s long-term objective of facilitating industrial development.

Ola Tronrud  (born in 1953) showed early interest in manufacturing machines and established Tronrud Engineering AS in the basement of his house in 1977. Tronrud Engineering remained a one-man business for seven years, after which he hired his first employee and moved to a new location at Røyse (Hole Municipality). After seven expansions of its building in Hole, Tronrud Engineering sought a new location to ensure space for the further expansions. In 1999, Ola Tronrud bought an industrial property at Eggemoen Airport, back in Ringerike Municipality. The seller was the local government, and the property included part of a runway from WWII and a vast forested plateau. The municipality's objective was that Eggemoen should be developed into an industrial park with its own airport. Since then, Ola Tronrud AS has bought more property and invested substantial resources into creating in what is today a well- structured industrial estate - spread over approximately 230 hectares and with its own 2100-m long asphalt runway.

While nurturing technological enterprises remains its core objective, the industrial estate also has a focus on the aviation and defense industries - two sectors that have a history at Eggemoen.

The Hønefoss Airport, Eggemoen was originally built by the Russian prisoners of war who were brought here by the Germans during the Second World War. This was the German aerial warfare branch’s (Luftwaffe) largest airport project in Norway. When the construction of the airport was completed in November 1944, the war was in its final stages. The airport was meant to be transit airport for large fighter aircraft. In the first few months after its completion, the airport was put to substantial use by fighter aircraft for purposes such as refueling and inspection. The airport also served as a transit station for a variety of transport and surveillance aircraft. An interesting fact about the erstwhile airport at Eggemoen is that it was classified as "Nacht und Land Ready Ein" - an operational status that was higher than what Fornebu Airport had at the same time.

In the post-war period, Eggemoen was kept in use by Østlandske Flyselskap, who established a base here in 1946 and continued to operate out of Eggemoen until 1952 – mostly for air taxi and flight school. And in 1951, the Royal Norwegian Air Force also moved its pilot training school to Eggemoen. This was a short-term role for the airport, as the school was moved to another location in 1952. During this period, airlines such as Nor-Fly and Wideroe were also operating widely from Eggemoen. And more recently, Ringerike county’s Flying Club (Ringerike Flyklub), as well as the aerial fire-fighting services, have used the airport.

In 2009, Ola Tronrud AS decided on closing the airport in order to renovate the runway. And a year later, the 2,105 m asphalt runway was ready for use.

The Norwegian Armed Forces established the military base at Eggemoen in 1950 and then from 1954 onwards, it served as the shooting range for the engineering corps/brigade in Southern Norway. The firearm education department of the engineering regiment took over the camp in 1963. The military camp continued to be used by the engineering regiment until 2001 when they decided to abandon the site. The defense forces finally moved out of the premises at Eggemoen in 2004 and the property was put up for sale. And in 2008, the Eggemoen military base was bought by Ola Tronrud AS. The cyber cell of the Norwegian defense, however, retained its establishment at Eggemoen and is based in an area adjacent to the industrial park.

And today, while there are several modern industrial structures at Eggemoen, many of the old buildings from the military base are also in commercial use. Click here to know more about the companies with their base at the industrial park.

As an innovator-cum-entrepreneur thorough and through, Ola began to develop and produce special machines in 1977 and has since then, he has built Tronrud Engineering to be a solid company with a broad expertise. 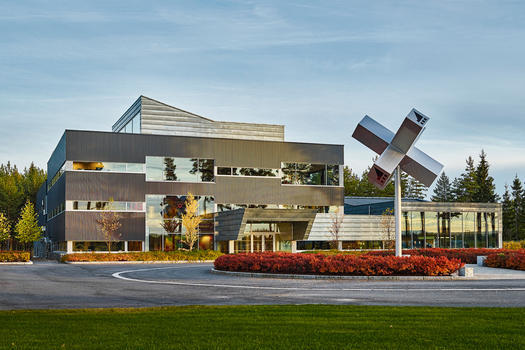 A number of companies who are world leaders in their respective fields have established a base at Eggemoen, making it a competence centre for innovation and technology.